Many recipes – dip, stroganoff, etc. – call for “Onion Soup” mix, which is generally found in the soup or seasoning aisle of the grocery store.

After my epiphany with taco seasoning, it occurred to me that there was probably a way to make a dry onion soup mix at home as well.

When I read the ingredients on the packaged mix I’d been using (Mrs. Grass Onion Soup), I really got motivated to make my own mix.

The label on the Mrs. Grass package reads:

Hmmm… there appears to me to be a whopping four “real” ingredients in there:  dehydrated onions, salt, sugar, and onion powder.  Everything else in there is, in my opinion, worthless: fillers, texturizers, colors, etc.

Plus – how many forms of MSG have they got in there?  A few years back, I found out that MSG isn’t always labeled as such; it comes in many different forms.  You can see a list here… anyway, I count at least SIX forms of MSG in that list.

And so, I went on the search for a good recipe for an onion soup mix.

It didn’t take long. I’ve had my version of the recipe jotted down in my cookbook for years, but I’m pretty sure that my original source was a copycat recipe found here.

The original calls for beef bouillon powder, but I haven’t used bouillon ever since I started making my own broths.  If I was making a dip, I’d have to either buy bouillon or reduce some broth – but since I generally use my onion soup mixes in stroganoff, I just use broth and omit it from the dry soup recipe.

Here is the cast of characters: 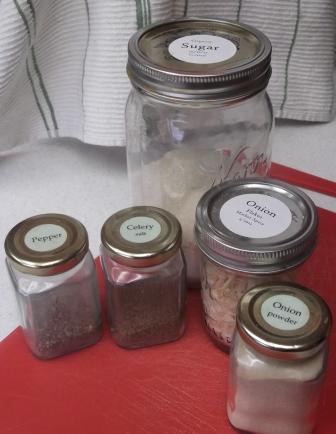 Measure the following into a small container:

About five tablespoons of the mix are equal to one package of store-bought stuff.

Voila!  Not a mad-chemist-ingredient in sight. 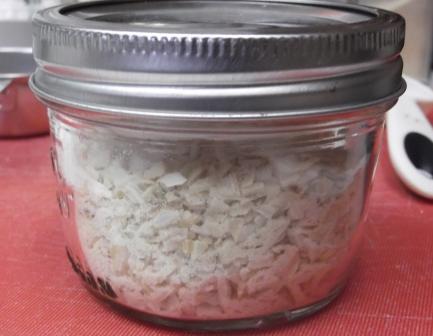 This recipe was shared on Gluten Free Wednesdays.

Next up:  Beef Stroganoff